Green Goblin has a moulded helmet to resemble his appearance in the film, which was a grotesque, angry goblin face and gold printing for its eye lenses and teeth. In the back, it slopes diagonally and is open. The head is green and printed with Osborn's yellow face visible through the head mask. The face is identical to Norman Osborn's, and the back is printed with the back of the goblin mask with five "V"'s. His torso, arms, and legs are bright green, while his hips and hands are dark green. The torso is printed on the front and back to resemble the character's armour, which consists of several body armour plates held together. The printing continues onto the legs, where it depicts knee pads.

He came with standard minifigure heads in trans orange to resemble his pumpkin bombs in the film, as well as with his purple, dark grey, and white brick built glider. The design of the glider changes between 1374 Green Goblin and 4852 The Final Showdown.

This variant is a large Hulk like mould. He has a large goblin like head with ears and olive green skin and light green eyes and an expression. He has a similar body to hulk's with a small difference of his silver grey and black outfit moulded onto his body, shoulders, and legs.

The Goblin has two variations in the game: his traditional comic appearance and his look in the Ultimate Spider-Man. Originally they would be able to transform into each other similar to the Hulk, but they soon gained different character tokens for unknown reasons.

He has a purple hat that is similar to the Lawn Gnome, but it has a sash hanging down in the back and green ears moulded on. Goblin has a green head printed with large yellow eyes and smile, bent into a maniacal laugh. He has purple hands, torso and hips, with green arms and legs. His torso is printed with the creases of his clothes. His legs are printed with his boots. He comes with a purple satchel and a brick built grey bat shaped Goblin Glider.

His abilities in the game include throwing Pumpkin Bombs to destroy silver LEGO, and flight using the Goblin Glider.

This variant is based off of the Ultimate Spider-Man variation, however, there are large grey hexagonal armor plates are on the legs. His moves are the same as the Hulk's, minus the ability to transform into a minifigure.

Norman Osborn was the CEO of Oscorp, a weapons technology company. He had a son named Harry Osborn, the best friend of Peter Parker, but often neglected his own son. He was fired by his board for poor judgement regarding a contract.

He became enraged and infused a powerful steroid drug into his system, but the drug drove him insane. As the Green Goblin, he attacked and killed the board members that fired him at a parade. Spider-Man then stopped him and saved Mary Jane Watson, but the Goblin got away. The Goblin then attacked J. Jonah Jameson and asked for the photographer of Spider-Man, which Jameson refused to tell him, and Spider-Man saved Jameson but was afterwards accused of being in cahoots with the Goblin, turning the city against him. At Thanksgiving dinner, Norman saw Peter's wounds and deduced that Peter was Spider-Man. They had their final battle at the Brooklynn bridge after he kidnapped Mary Jane. After he was beaten, he attempted to distract Spider-Man with a fake plea for sympathy while his glider prepared to impale Spider-Man from behind. Using his Spider-Sense, Spider-Man dodged the glider, which killed Norman. With his dying breathe, he asked Peter not to tell Harry about his crimes as the Green Goblin, which Peter honoured.

He later appeared as Harry's hallucinations and urged him to have revenge on Spider-Man, which led to Harry becoming the New Goblin.

Norman Osborn hired Doc Ock to make a super soldier serum with Spider-Man's DNA. After failing to do so, Doc Ock injected a serum (a DNA mixture of Spider-Man and Venom) into Norman's body, turning him into a large goblin like creature. He went on a rampage and destroyed the Helicarrier, in the process stealing a glider and bomb glove from Curt Connors and taking the Venom symbiote from his son.

The Green Goblin returned, abducted Peter Parker (unaware he was Spider-Man) and injected him with a mixture of the Goblin serum, Harry's blood, and the Venom symbiote which resulted in turning Peter into Carnage. S.H.I.E.L.D. and his teammates had to protect Harry from Carnage. Harry realized Peter was Carnage and when it tried to attack him, he commanded it to stop, and it obeyed as Harry was the previous host, the symbiote left Peter and attached itself back onto Harry to become Venom again. Venom then went after the Goblin and Spider-Man and Venom formed a truce to take him down. Spider-Man then had to talk sense into the both of them, and had to turn into Peter to talk sense into Harry. Harry managed to free himself form the symbiote and placed it in a beaker. The Goblin then grew suspicious of Peter and assumed Peter was Spider-Man, until the team (with Iron Fist filling in for Spider-Man to avoid suspicion) showed up and fought with the Goblin. The Venom symbiote ended up in S.H.I.E.L.D. custody while the Goblin escaped.

After the Goblin was captured and enroute to S.H.I.E.L.D.'s prison on the moon aboard Tricarrier, he released a sample of Venom which reunited with the one in S.H.I.E.L.D. custody. The symbiote the latched itself onto S.H.I.E.L.D. Agents, Agent Coulson, and Nick Fury, and freed Goblin from his prison. Spider-Man and Ock formed a truce to develop an antidote and stop Goblin who had now bonded with the symbiote. Spider-Man dispersed a cure aboard the ship, curing the agents and turning Goblin back to Norman Osborn. Osborn was placed in the S.H.I.E.L.D. medical bay under close watch.

Spider-Man had to team up with a cured Norman as the Iron Patriot, as Norman was trying to make amends for the past. Doc Ock attacked them with Spider Soldiers (Ock had finished Norman's plans to make such an army). They managed to defeat the soldiers, but Ock promised revenge. Patriot saved his son in a falling elevator. Fury thanked Osborn for his heroic deeds, but still thought Norman may sink back into his old ways.

Iron Patriot went into the sewers to help Spider-Man find the Lizard to deliver a cure and discovered that he was armoured in stolen Oscorp technology. He later arrived at the Raft to help Spider-Man and his team defeat an armoured Sinister Six (Ock, Lizard, Rhino, Electro, Kraven the Hunter and Scorpion). Iron Patriot assigned each member to the Sinister Six member they could match while he vengefully pursued Octavius. However, the Six deduced his plan and defeated the team. Despite his powerful armor, he was defeated by Octavius. Ock then injected him with the Goblin serum turning him back into the Goblin. The Goblin defeated the Six with ease (minus the Lizard who had turned back into Connors). He then tore off, one of Ock's arms revealing more vials of Goblin serum and had a thought about Spider-Man's team. He then took off in the S.H.I.E.L.D. jet that brought them, taking the team hostage.

He took over the wreckage of Helicarrier submerged in the Hudson and placed Goblin missiles on it, re-branding it the "Hell-Carrier" ,planning to gas the city turning the civilians into Goblins . He injected Spider-Man's team with Goblin serum and they fought Spider-Man util he administered the cure and talked them into sense, reminding them who they were. They managed to stop the Goblin and his plan and Goblin was captured. Connors informed them that there was more Goblin DNA the human, and this time they might no be able to turn him back to Osborn.

He had a plan to travel across 6 different universes and gather DNA from each of the alternate Spidermen in order to become more powerful. He used Electro to power up a magic artifact that can allow him to travel across the multiverse. He became Spidergoblin. With the help of the alternate Spidermen and Electro, Green Goblin was turned back into Norman Osborn and lost a few years worth of his memory.

He is one of the super villains assembled by Dr. Doom and Loki to collect the pieces of the Silver Surfer's surfboard, made of the cosmic bricks, to help construct the Dr. Doom's Doom-ray of Doom.

When Spidey, Black Widow, and Hawkeye went to Oscorp, Goblin escaped and they fought Venom instead.

Later at Doom's fortress, he fought Nick Fury and the Fantastic Four.

Green Goblin ultimately stop Galactus with the heroes and villains.

Green Goblin without his mask 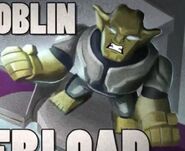 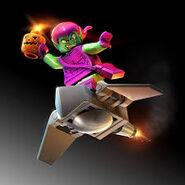 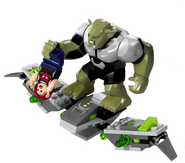