"I've made this trip like four times today. Flash, what's going on?"
―Green Lantern in LEGO Batman 3: Beyond Gotham

In LEGO Batman 2: DC Super Heroes, Green Lantern's appearance is comic-book based. He has a similar torso, but it is smoother without the triangles, has black in place of dark green, and the circle behind the Green Lantern logo is white. His arms are black and his hands white. His legs are also black, but have green boots printed on. Green Lantern's head and hair are the same, and he has been seen with a determined expression and smirk. He carries a ring piece similar to the one in The Lord of the Rings, but it is colored green and has the green lantern logo on it. 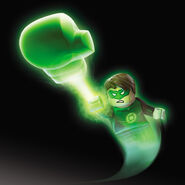 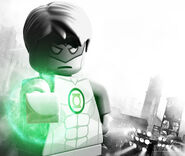 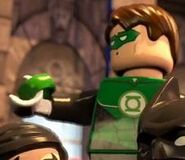 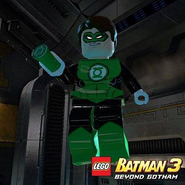 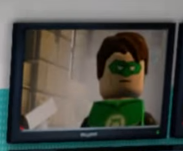 Bio
Add a photo to this gallery

Green Lantern in The LEGO Batman Movie with Batman, Superman, Wonder Woman, The Flash, Cyborg, Aquaman and Green Arrow
Add a photo to this gallery