"In brightest day, in blackest night, no evil shall escape my sight. Let those who worship evil’s might, beware my power! Green Lantern’s light!"
―Jessica Cruz in LEGO DC Comics Super Heroes: Aquaman: Rage of Atlantis

Jessica Cruz is a DC Comics Minifigure set to debut in 2018 alongside the DVD release of LEGO DC Comics Super Heroes: Aquaman: Rage of Atlantis.

Jessica Cruz is the first female Green Lantern of Earth. After witnessing the deaths of her friends at the hands of two mobsters, Jessica was found and possessed by the Ring of Volthoom, which sought to exploit her trauma. After conquering her fears and breaking free of Volthoom's grasp, Jessica was chosen to be a Green Lantern. 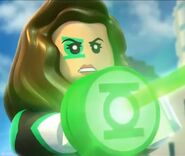 Preliminary image of Jessica Cruz
Add a photo to this gallery
Retrieved from "https://brickipedia.fandom.com/wiki/Green_Lantern_(Jessica_Cruz)?oldid=1921648"
Community content is available under CC-BY-SA unless otherwise noted.