Gregory Goyle was a friend of Draco Malfoy's. Along with Vincent Crabbe, he was one of the Slytherin's that were Malfoy's sidekicks. Like Malfoy and Crabbe, his father was a Death Eater. Harry Potter impersonated him when he used Polyjuice Potion. In Harry Potter and the Deathly Hallows Part 2, he dies when he falls into the Fiendfyre while trying to escape.

In LEGO Harry Potter: Years 1-4, Gregory is almost identical to his first variation, except his robes are recoloured dark-grey and his skin tone changed from yellow to flesh. 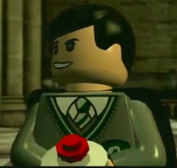 Goyle in the video game