Gresh is a BIONICLE character. He is a Glatorian, and met Mata Nui when he first arrived on Bara Magna. When warned of the impending attack on his home planet by Makuta and his armies, Gresh donned new armour and fought to protect his people. He survived the battle, and is now living on the reformed Spherus Magna. 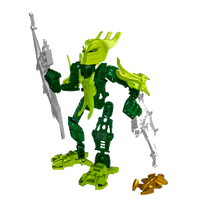 Gresh has been released more than once and has appeared in other products, and so may be referring to:

Retrieved from "https://brickipedia.fandom.com/wiki/Gresh_(Disambiguation)?oldid=1191881"
Community content is available under CC-BY-SA unless otherwise noted.