Grogu, otherwise known as The Child, is a Star Wars minifigure first released in 2020.

Grogu spent much of his early years in the Jedi Temple on Coruscant, learning the ways of the Force from various masters. When the Great Jedi Purge occurred, he was taken from the temple. What happened next is unclear, but for a number of years Grogu did what he could to survive, including concealing his abilities from others. Such caution proved necessary, as many came in search of him for various ends.

By the time Grogu was around fifty years old, still little more than an infant in the reckoning of his species, he had ended up in the hands of a violent group on the planet Arvala-7. Various bounty hunters had been sent to try and retrieve him; the lucky ones escaped with their lives. It was only the unlikely team of the Mandalorian and IG-11 who managed to breach the facility. However, Mando was forced to neutralize the assassin droid, who had been sent to kill Grogu while he had been hired to bring him back alive.

After a few harrowing experiences together, Mando brought Grogu back to Nevarro where his client waited. However, after delivering “the Child” to the remnant Imperials, the Mandalorian reconsidered his actions. He returned and rescued Grogu, and was aided by fellow Mandalorians in making his escape. This aid was timely, as the client responded by renewing the bounty on Grogu, leading to the pair being targeted by the Bounty Hunters’ Guild. With his unlikely new protector, Grogu fled from world to world.

Eventually, Greef Karga of the guild reached out to the Mando, attempting to reach a peaceful settlement. Correctly suspecting a trap, but realizing that he and Grogu couldn’t keep running forever, the Mando took precautions. Recruiting Kuiil the Ugnaught, a rebuilt and reprogrammed IG-11, and the former Rebel trooper Cara Dune, the pair returned to Nevarro. They soon gained another ally after Grogu used his abilities to heal Greef Karga.

Unfortunately, Karga soon revealed that things on Nevarro had gotten worse, with more Imperials arriving to occupy the planet. Worse, they proved to be under the command of Moff Gideon, a ruthless Imperial governor who sought Grogu for his own ends. Only with the aid of a Mandalorian armorer were the motley allies able to thwart Gideon for the time being, but Kuiil and IG-11 were lost in the process. As such, the Mandalorian-revealed now to be named Din Djarin-set out to return Grogu to his people: the Jedi.

After several adventures, the pair met Ahsoka Tano, a former Jedi. By communicating with Grogu, Ahsoka learned what she could of his past and disclosed it, along with his name, to Djarin. Based on Grogu's attachment to the bounty hunter, Ahsoka refused to train him, having seen the (Anakin Skywalker) dangers such feelings posed to a Jedi. At Djarin's insistence, she told him to take Grogu to a ruined temple on Tython where he might be able to find a master for the youngling. 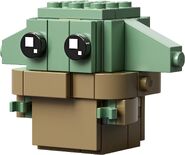 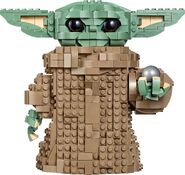 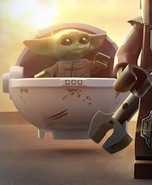