Groot is a brown brick-built figure who has a new mould for his head, which also covers his torso. The rest of his body is wood brown with leaf-green accents all joined together by the new micro-size ball joints.

Groot is a member of the Guardians of the Galaxy, which also consists of Star-Lord, Gamora, Drax the Destroyer and Rocket Raccoon. Groot comes from a race of tree-like aliens. He can absorb wood to gain strength, control trees, and manipulate his form and grow root-like appendages. Groot is also Rocket Raccoon's friend/sidekick and hired muscle, however Rocket will regularly insult his intelligence.

Because of his limited intelligence, Groot's vocabulary is limited to the sentence "I am Groot."

Groot is a sentient, tree-like individual and frequent accomplice of intergalactic criminal Rocket Raccoon. Together, the pair travelled the galaxy picking up bounties until they met Star-Lord who then convinced them to assist him to sell the Orb for a massive project. However as it was discovered that the Orb was one of the Infinity Stones which was being sought out by Ronan the Accuser, Groot convinced his friends to risk everything to stop Ronan's plans to destroy Xandar and enslave the world. During the battle, Groot sacrificed his own life to save his new friends. However part of his destroyed body was planted by Rocket who regrew, and is now called Baby Groot, as they joined the Guardians of the Galaxy.

As Groot slowly regrew to his original size, he stayed with the Guardians and endeavored with them on many adventures. Groot's tiny body and youthful innocence meant the Guardians spent much of their time trying to keep him out of harm's way. They were hired by the Sovereign to kill the Abilisk, a powerful multidimensional monster that was trying to devour the Anulax Batteries, which powered the planet. After being chased by the Sovereign to Berhert because of Rocket Raccoon who double-crossed them by stealing the batteries, they met Peter Quill's father Ego. He and Rocket, along with Yondu Udonta, were later captured by Taserface's faction of the Ravagers, but Groot was able to help them all escape. Groot then joined his allies and assisted them in destroying Ego and saving his friends, although Udonta lost his life during the battle. Remaining with the Guardians, Groot continued to grow and started exhibiting the personality of an adolescent.

The tree-like Groot hails from a world designated only as “X,” which is populated by sentient plants. At times playful and childlike, Groot makes up for his limited vocabulary with his ability to manipulate and grow his giant bark-covered form as needed – skills he has long used to aid and abet his friend Rocket Raccoon’s schemes. Now as the fate of the cosmos hangs in the balance, Groot must join the Guardians of the Galaxy for an adventure that will test the limits of even his monstrous strength. 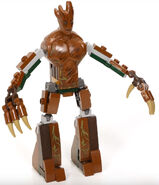