Dromaeosaurid Theopod Grundalychus otherwise known as the Grundal, were Dromaeosaurid Theropods that roamed Ninjago before their supposed extinction in Ninjago: Masters of Spinjitzu.

Grundals were said to have hides tough enough to withstand ordinary weapons. They were also nocturnal, hunting at night, rumored to only be destroyed with light.

One brown Grundal briefly menaced Morro before he was saved by Sensei Wu, which the Master of Wind took as a sign that he was meant to be the Green Ninja. A red Grundal was known to have been resurrected by Lord Garmadon. He did so by bringing its skeleton, which was stored in a museum, back to life using the Mega Weapon. When the potion was used, the Grundal was sent back to his own time, meaning he was destroyed at the present.

A number of green Grundals later appeared in the remote area known as Primeval's Eye. 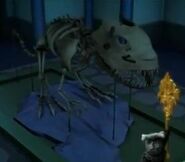 The Grundle's Skeleton in the Museum