"Come on, you can do this! I believe in you! You’re a Lantern!"
―Guy Gardner encouraging Greenzarro in LEGO DC Comics Super Heroes: Justice League vs Bizarro League

Guy Gardner is a Super Heroes minifigure who appears in LEGO DC Comics Super Heroes: Justice League vs Bizarro League and LEGO Batman 3: Beyond Gotham as a DLC character.

Guy Gardner and Hal Jordan were Abin Sur's options for his successor as the Green Lantern of sector 2814, but he finally chose Jordan due to proximity. Sometime later, a group of renegade Guardians gave Guy a ring, and eventually, the actual Guardians allowed him to keep it. With time, Gardner became cocky, obnoxious, and disrespectful, and when he joined the Justice League, he tried to become the leader, but he mellowed down a bit when he developed feelings for his Justice League teammate Ice. 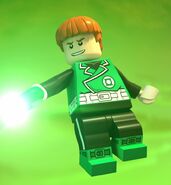