Brickipedia
Register
Don't have an account?
Sign In
in: Class 3 articles, Pirates of the Caribbean Minifigures, Minifigures introduced in 2011
English

Hadras is a Pirates of the Caribbean minifigure that was released in 2011 in 4183 The Mill.

Hadras is a cursed crew member of the Flying Dutchman, the supernatural ship owned by Davy Jones. He was half man and half hermit crab, with a shell around his head.

He was sent with some of his fellow shipmates to reclaim the Dead Man's Chest from Jack Sparrow the crew of the Black Pearl. He stole the Dead Man's Chest and tried to escape with it. During the ensuing battle, Jack threw a coconut at him and knocked his head off. His shell-head, however, sprouted legs and followed his body back to the Dutchman.

Hadras was later present during the battle of Calypso's Maelstrom. The Dead Man's Chest fell on his head, flattening it, and he toppled off the side of the Dutchman. 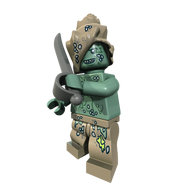 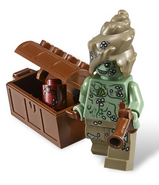