Brickipedia
Register
Don't have an account?
Sign In
Advertisement
in: Class 4 articles, Minifigures introduced in 2012, The Lord of The Rings minifigures
English

Haldir is minifigure from the theme The Lord of the Rings released in 2012. He has appeared both physically and in a video game. He also appears in 50011 The Battle of Helm's Deep as a microfigure.

Haldir was an Elf of Lothlórien, and a marchwarden who guarded the forest's northern borders. When the Fellowship of the Ring arrived in Lórien, he became their guide to Caras Galadhon. During this time, the Fellowship were made to walk blindfolded, due to Gimli having to be blindfolded for being a dwarf.

In Peter Jackson's film trilogy he fought in the Battle of Helm's Deep, where he was slain by a Berserker Uruk-hai. 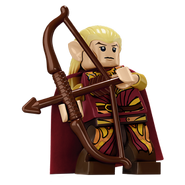 Haldir at the Toy Fair 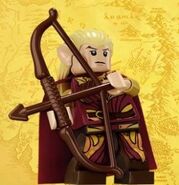 Haldir's back printing and alternate expression

Haldir with his bow 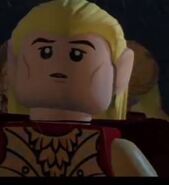 Haldir in LEGO The Lord of the Rings: The Video Game

Deutsch Français Nederlands
Community content is available under CC-BY-SA unless otherwise noted.
... more about "Haldir"
RDF feed
Accessories
Bow and Arrow
Cape +
Appearances
9474 The Battle of Helm's Deep
50011 The Battle of Helm's Deep +
ArticleRating
4 +
Image
lor020.jpg +
Img1
lor020.jpg +
Img2
6038419.jpg +
InfoboxTemplate
Minifigure +
ShopDescription
Haldir Haldir is an honorable Wood … Haldir</br></br>Haldir is an honorable Wood Elf. Like Legolas, he dislikes Dwarves and has had no dealings with them since the Dark Days. When the Fellowship enters the Heart of Elvendom on Earth, Haldir will not allow them to pass through. The Ring is too evil, and he does not trust Gimli. Aragorn convinces him to let go of the past for the greater good of Middle-earth. Haldir and his people agree to help the Fellowship on their journey and fight in the great Battle of Helm's Deep. fight in the great Battle of Helm's Deep. +
Theme
The Lord of the Rings +
Title
Haldir +
Txt1
Minifigure +
Txt2
Microfigure +
Years
2012 +
Advertisement