Halvautomatisk Legetöjspistol (translated as The Halfautomatic Pistol), first produced as a wooden toy in 1945 and later as a Plastic Toy in 1949, features a spring-loaded mechanism that could feed projectiles into the barrel from a magazine, allowing rapid firing.

This set is a mainly black toy pistol. The pistol is one part, excluding projectiles. 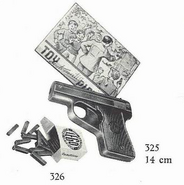 The box and contents

A closeup of the ammunition
Add a photo to this gallery

Retrieved from "https://brickipedia.fandom.com/wiki/Halvautomatisk_Leget%C3%B6jspistol?oldid=1862595"
Community content is available under CC-BY-SA unless otherwise noted.