The Hangar Guard is a minifigure who appeared in LEGO Indiana Jones 2: The Adventure Continues. In Indiana Jones and the Kingdom of the Crystal Skull, several hangar guards were security personnel who guarded Hangar 51, but were later killed by Soviets disguised as soldiers of the US military. However, they were merely captured in LEGO Indiana Jones 2: The Adventure Continues, and they escaped when the Russians opened the hangar doors. They wear tan police hats and sport General Ross's torso.

The hangar guards that appeared in cutscenes are based in the M.P. Sargent and M.P. In Guard Hut which they spoke in the movie.

In Latin America movie’s dub, they were voiced by the actors José Antonio Macías and Víctor Ugarte. José Antonio Macías also voices Jock in Raiders of the Lost Ark re-dubb, Wu Han in Temple of Doom re-dubb, The Joker in Batman Dark Night trilogy and Captain America in The Avengers, and Víctor Ugarte also voices Harry Potter (Minifigure) since the Globet of Fire and Benny (The LEGO Movie) in The LEGO Movie. 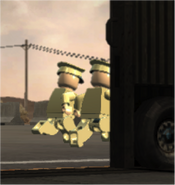 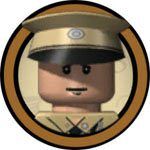