This article is about the first Ant-Man. For the second Ant-Man, see Ant-Man.

Dr. Henry "Hank" Pym was a scientist who was experimenting with size alterations when he discovered particles that could alter an object's size with no side effects. He called them "Pym-Particles" and used them to battle evil as the super hero "Ant-Man". He is in love with his ally, the Wasp.

Both Ant-Man and the Wasp became founding members of the Avengers. After finding that Pym-particles also made him grow, Hank became Giant-Man and later Goliath. Eventually, Pym decided to build Ultron to help protect the world, though Ultron gained sentience and turned evil.

As both Ant Man and Giant Man 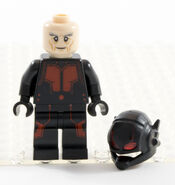 AS he appears in the Giant Man Polybag