Hank the Castaway[1] is a Pirates minifigure that appeared in 6241 Loot Island.

Hank wears a blue bandanna and has a grey beard. His torn, worn-out clothes are the color Reddish Brown, with unique printing on his legs. He holds a Warm Gold telescope.

According to his LEGO Legacy: Heroes Unboxed bio, Hank is the subject of many rumors about his abilities, past, and association with rats.

The set description for 6241 Loot Island reveals that Hank was shipwrecked, and he now guards the secret cave on Loot Island. In the set's comic, Hank teams up with a pirate to defend Loot Island from a Royal Navy soldier; he uses the catapult to hit the soldier on the head, and then holds the soldier at gunpoint. Afterward, Hank and the pirate roast a fish, and Hank examines a gold coin from the treasure chest.

Hank the Castaway on his raft 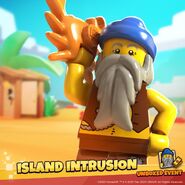 Hank the Castaway in LEGO Legacy: Heroes Unboxed
Add a photo to this gallery

Retrieved from "https://brickipedia.fandom.com/wiki/Hank_the_Castaway?oldid=1998524"
Community content is available under CC-BY-SA unless otherwise noted.