Hard Hat has a new mining helmet piece with a clear lens. His face is the same as Rex Tyrone's. His torso is white and has new printings depicting a shirt with a breast pocket with a pen, a tan tie, dark red suspenders and a brown belt with a buckle. His dark brown legs are unprinted.

In the Demolition theme, Hard Hat is nearly identical to his Mining appearance, although he wears a standard red hard helmet without a light.

In LEGO Quest & Collect, Hard Hat is a physical attacker with the skills "Landmark Complete", "Dust Storm", and "Heavy Machinery". According to his profile, he is a senior manager for Buildit, and he is married with a wife. He always keeps his shovel with him, even while he sleeps. 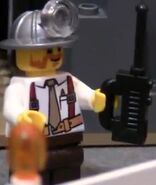 Retrieved from "https://brickipedia.fandom.com/wiki/Hard_Hat?oldid=2045420"
Community content is available under CC-BY-SA unless otherwise noted.
... more about "Hard Hat"
RDF feed
Accessories
Megaphone +
Appearances
4204 The Mine


A senior manager for Buildit, the city's largest construction company, Hard Hat never goes anywhere without his shovel. He even sleeps with it - much to the annoyance of his wife! +
Theme
City +
Title
Hard Hat +
Txt1
Mining +
Txt2
Demolition +
Years
2012, 2015 +