Harry Cane, also known as Billy Speed[1][2][3], is an Adventurers minifigure introduced in 1998 and has appeared in five sets to date. He makes appearances in the Egypt and Jungle sub-themes.

Cane has black legs, and a brown torso printed with an aviator's jacket. His arms are brown, and his hands and head are yellow. His face has a smirking expression, and a black moustache. He wears a brown aviator's helmet with black goggles.

Harry Cane is a pilot who occasionally helps Johnny Thunder in various expeditions. 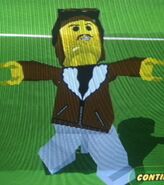