Harry Potter and the Deathly Hallows is a Harry Potter subtheme which began in June of 2011. Similar to the Half-Blood Prince, LEGO has not made a specified subtheme for this film, yet two sets are generally considered to be based on it.

It is also the last story in LEGO Harry Potter: Years 5-7. Just as what happened for the film, this plot was broken into two parts in the video game.

Voldemort is on the verge of complete domination of the wizarding world. The only ones standing in his way are Harry Potter and the Order of the Phoenix. Meanwhile, Harry, Hermione Granger, and Ron Weasley search for Voldemort's horcruxes to stand a chance at defeating him. Meanwhile, Hogwarts has a new Headmaster: Snape.

Sets with references to this film/book:

The poster which the LEGO poster recreates.

The poster that the LEGO poster recreates. 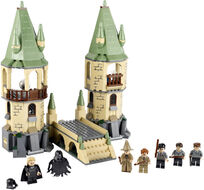 4867 Hogwarts.
Add a photo to this gallery
Retrieved from "https://brickipedia.fandom.com/wiki/Harry_Potter_and_the_Deathly_Hallows?oldid=1713134"
Community content is available under CC-BY-SA unless otherwise noted.