Harry Potter and the Half-Blood Prince is the the 6th novel/movie in the Harry Potter series. It was started in 2010 and, although other sets like 4842 Hogwarts Castle and 4841 Hogwarts Express have allusions to this movie, the Burrow is the only official set in this subtheme. Similar to Deathly Hallows, LEGO has not made a specified subtheme for this film, yet one set is based on it. It is also featured as a story in LEGO Harry Potter: Years 5-7. 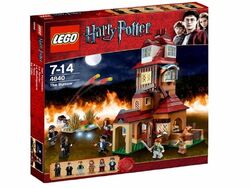 With Voldemort's return now accepted by everyone. Death Eaters are wreaking havoc on Muggles; destroying the Millennium Bridge, and Wizards; kidnapping the wandmaker Mr. Ollivander and destroying his Diagon Alley shop. The Death Eaters then burn down the Burrow.

Professor Dumbledore has Harry convince Professor Slughorn to return to Hogwarts to teach, and meanwhile Bellatrix Lestrange entreats Professor Snape to enter an Unbreakable Vow with Draco Malfoy's mother, Narcissa Malfoy, assuring that he will complete the task assigned to Draco, should Draco fail and that he will protect him and make sure he doesn't get hurt. Harry, Ron Weasley, and Hermione Granger, while in Diagon Alley, spot Draco entering Borgin and Burkes and taking part in a ritual with other Death Eaters, and become suspicious of his actions.

Harry and Ron take up Potions now that Professor Horace Slughorn, with lower standards than Snape, is teaching the class; however, as neither was expecting to take the course, they have to find textbooks for themselves in the bookcase. Harry's book is annotated with more exact instructions, hints, and improvements scribbled in the margins to the potions, giving him an edge over the other students. Harry finds that it once belonged to the someone who called himself (or herself as Hermione suggests) "The Half-Blood Prince."

Dumbledore reveals to Harry through the Pensive memories of Tom Riddle (Voldemort's original name) and instructs Harry to get an important memory out of Slughorn. Harry is able to get the memory from Slughorn, which reveals that Riddle inquired about the creation of Horcruxes, devices that store a portion of the creator's soul to allow them to live indefinitely. Dumbledore says that they must track these down and destroy them to make Voldemort mortal and have a chance of defeating him.

Meanwhile, Harry is suspicious of Draco and believes him to be behind two indirect attempts on Dumbledore's life, both of which failed and nearly resulted in the Deaths of Ron and Katie Bell.

Dumbledore and Harry travel to a seaside cliff, and enter a cave where the Horcrux is located. After Dumbledore is forced to drink a torturous potion in order to retrieve the Horcrux, and they are attacked by inferi (corpses re-animated with Dark magic), they recover the Horcrux, a locket, and return to the Astronomy Tower at Hogwarts Castle.

However, Draco appears to kill Dumbledore, but is unable to do so. Bellatrix Lestrange, Fenrir Greyback, and other Death Eaters arrive, and join Draco in the tower. Snape silently arrives and then goes upstairs, joining the other Death Eaters, and then casts the killing curse on Dumbledore, throwing him over the side of the tower and killing him. Snape, Draco, and the other Death Eaters depart the school, Bellatrix casts the Dark Mark over the school, and sets fire to Hagrid's hut in glee. Harry pursues Snape in anger, and tries to attack him, but is knocked aside easily. As Snape departs, he explains to Harry that he is "The Half-Blood Prince."

Harry returns to the school to find the staff and students mourning over Dumbledore's death. The Horcrux they obtained was a fake, containing a message from an "R.A.B." that stated he had already taken it. Harry tells his friends that he does not plan to return next year, instead he plans on seeking out R.A.B. and the other Horcruxes so that he may put an end to Voldemort; Ron and Hermione remind Harry that they are his friends and will help alongside him in his goal.

The poster which the LEGO poster recreates.

Sets Released for the Movie

Sets That Include Allusions To This Movie/Book