A hat is a plastic LEGO piece that comes in many shapes and sizes. It represents a Minifigure's hat. Connects with the head to make the "top part". They also include the wigs and have been around since 1974.

Hats were first available in 1974 when Minifigures were first introduced. There were red hats and wigs until the classic Minifigures. 1975 is when Top hats, Doctor hats (White), pigtails, and cowboy hats. Then, 1977 is when Indian hats were introduced. 1978 is when you see castle, town and space an bring new meaning to Hats. The different kinds of hats are reused in many current themes.

After 1978 brought of all the kind you see now. 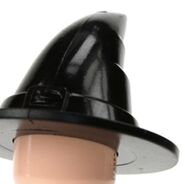 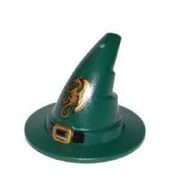 A common LEGO hat.
Add a photo to this gallery
Retrieved from "https://brickipedia.fandom.com/wiki/Hat?oldid=1634044"
Community content is available under CC-BY-SA unless otherwise noted.