Hawkeye, also known as Agent Clint Barton, is a minifigure for the Marvel Super Heroes theme introduced in 2012.

Hawkeye has a double sided face depicting him serious with glasses and angry without them on the other side. Hawkeye's hair piece is Part 92081 in dark orange. His torso depicts armour with a dark red arrowhead stripe down the center, along with his quiver strap and part of a belt on the bottom. He has back printing depicting his armour and the back of the strap with his quiver full of arrows. He has black legs with the hips continuing the belt and straps on his legs. His arms and one hand is in flesh, but the other is black. He comes with a new compound bow part.

The minifigure is based on his appearance in The Avengers.

His appearance in the game is nearly identical to his physical appearance, but his bow lacks the arrow.

His classic outfit is also available in DLC for the game.

Clint Barton was a circus archer who was tricked by Russian spy Black Widow into stealing Stark technology, so Hawkeye got into conflict with Tony Stark's "bodyguard" Iron Man. After some clashes with the Armored Avenger, Hawkeye got fed of being manipulated by Black Widow and reformed, joining the Avengers under Captain America's leadership, alongside Quicksilver and Scarlet Witch, at a point when the founding members had left the team. He eventually convinced Black Widow to turn on a new leaf too.

Barton later acted as a sniper with his bow and arrow during Thor's assault on a S.H.I.E.L.D. compound erected around his hammer, Mjolnir, which Thor tried to reclaim. However, he was never ordered to take a shot so took no action from his position.

Some time after the Asgardian battle in New Mexico, Hawkeye was assigned to guarding the Tesseract. While on duty, Loki arrived, using the Tesseract to transport him, and then stole it. Loki then used his staff to put Hawkeye under his control, and Loki tasked him with collecting the items that the likewise mind-controlled Dr. Selvig needed to open Loki's portal. Hawkeye used an explosive arrow to pull the Helicarrier from the sky (and in the proccess caused Bruce Banner to turn into The Hulk). Hawkeye was freed from Loki's spell when the Black Widow hit him in the head during a confrontation. He then joined the Avengers, which also consists of Captain America, Iron Man, the Hulk, Thor, and Black Widow, to try to repel Loki and his Chitauri army which aimed to conquer the Earth.

Hawkeye is a member of the Avengers that is called upon stop Loki, Dr. Doom and the team they assembled, as well as to defeat Galactus. 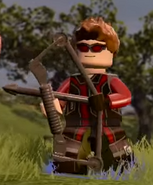 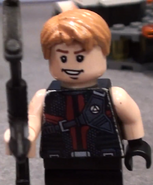 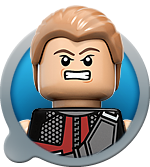 Classic Hawkeye
Add a photo to this gallery

Retrieved from "https://brickipedia.fandom.com/wiki/Hawkeye?oldid=1647997"
Community content is available under CC-BY-SA unless otherwise noted.