Hawkgirl has a golden, bird-like helmet with green stripes, small, white, comic-book styled eyes. She wears a small yellow shirt with black stripes on the side and her stomach is left exposed. She has backprinting showing the other side of her shirt. Her arms and hands are also exposed. She has golden wings on her back. One is folded and one is spread out. She has a Nth metal belt. Her legs are green with red boots and other designs.

She carries a mace, can fly, and has super strength.

Hawkgirl is a superheroine from the DC Universe with the power of flight. She works with her partner, Hawkman, and both are occasionally a part of the Justice League. Other members of the Justice League are Superman, Batman, Wonder Woman, Green Lantern, Flash, Aquaman, The Martian Manhunter, Cyborg, and at times Nightwing, Batgirl, Huntress, Supergirl, Zatanna, and Shazam.

In console versions, Hawkgirl is a member of the Justice League and is one of the members The Martian Manhunter is monitoring while he speaks to Bruce Wayne.

In the 3DS version, Hawkgirl is unlocked for purchase by finding the fourth minikit in Robot Sky Battle. She costs 200,000 studs.

On the console version, she can unlocked collecting 55 gold bricks. She can be found on a rooftop in the south-east part of the Ace Chemicals (Central Island) area in Gotham City.

Hawkgirl can be unlocked along with Shazam and Miss Martian via free play, in the mission "Space suits you, Sir!".

Hawkgirl’s awesome ability to fly comes from Nth metal, a mystical and otherworldly material that defies gravity and lets this Justice League heroine soar on her bird-like wings. She’s ferocious in battle, swooping in to defeat villains and then carrying them off to prison. As a member of the Justice League, she fearlessly patrols the sky in search of trouble, though she does have to watch out for flocks of passing geese. Bat-Fact: Hawkgirl is the reincarnation of an ancient Egyptian princess. Or maybe she’s an alien space-cop. I can’t keep track of all of these origins.

Hawkgirl along with Hawkman appeared in the movie as guests at the Justice League 75th Anniversary party that was held at the Fortress of Solitude. 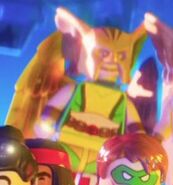