Brickipedia
Register
Don't have an account?
Sign In
Advertisement
in: Articles in need of expansion, Ninjago Minifigures, Minifigures introduced in 2018
English

Heavy Metal is a Ninjago: Masters of Spinjitzu Minifigure and a Dragon Hunter introduced in 2018. In the animated series it is revealed that Heavy Metal is a female character named Faith (voiced by Kathleen Barr, who also voices Misako).

Heavy Metal has the same torso that is used for all Dragon Hunter characters except Iron Baron, Arkade, and Jet Jack. Her legs are also used on all Dragon Hunter characters except Daddy No Legs and Iron Baron. Her head was later reused for Nitro, while her shoulder armor with face mask is the same as that used by Iron Baron and Muzzle. She comes with a brown hat previously used on the Jungle variant of Lord Garmadon from The LEGO Ninjago Movie. Another version was released in LEGO Ninjago Magazine, and is identical to the set version except for having a black bun hairpiece first introduced on the Sumo Wrestler in 8803 Minifigures Series 3. This is in contrast to her show hairpiece, which matched the element first created for the Diner Waitress in 71008 Minifigures Series 13.

Faith was a Dragon Hunter in service to the Iron Baron, but later sided with Wu, Kai, Cole, Jay, and Zane against him.

In "The Darkness Comes", Faith is brought to Ninjago by the Firstbourne, with both of them falling unconscious from unknown fatigue or injury. In "Endings" it is revealed that she and the former Dragon Hunters were attacked by the Oni, and that despite having the aid of the dragons they were overcome. Faith and the Firstbourne thus made their escape to Ninjago, where Faith eventually wakens in the Monastery of Spinjitzu. Despite still being weak, she joins Wu, Garmadon, and the Ninja in battling the Oni army. After the Oni are defeated, she witnesses the ceremony in which the Ninja commemorate their victory. 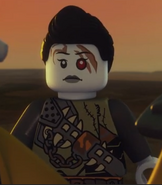 Faith without a mask. 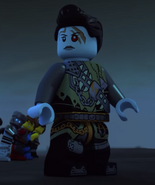