Hector Barbossa is a Pirates of the Caribbean minifigure released in 2011 within 4181 Isla De Muerta and 4192 Fountain of Youth.

Hector Barbossa was a human male who served as first mate on the Black Pearl under the command of Captain Jack Sparrow until he raised a mutiny against him. He later marooned Jack on an island and took command over the Black Pearl. Soon, he and his crew became cursed by the Aztec gold they found on the Isla de Muerta, meaning that under the moonlight they were revealed as un-dead skeletons, and were therefore almost invincible, being able to walk under water and be shot or stabbed without dying. However, this meant they also had no sense of taste or touch. The curse could only be lifted once all 882 Aztec coins that were stolen were returned to the chest they came from, along with a blood sacrifice from each crew member. Before realizing the cursed nature of the gold, the pirates strapped a cannon to Bootstrap's bootstraps and threw Bill "Bootstrap" Turner overboard (without realizing he had sent what would later become the last piece of gold, to his son William). The pirates collected all but Turner's coin, and thus they need the blood of a descendant of Turner to break the curse. He set out to find the last piece of Aztec Gold and initially believed Elizabeth Swann to be Bootstrap's descendant, before Will Turner revealed himself to be. He marooned Jack and Elizabeth on Rumrunner's Isle and set out to lift the curse. Jack warned him about Admiral Norrington's men attempting to catch his crew in the crossfire, Jack then deceived Barbossa and Will lifted the curse just as Jack used his one shot to shoot the now mortal Barbossa.

After Jack Sparrow was betrayed by Elizabeth and devoured by the Kraken, the crew of the Black Pearl retreated to Tia Dalma's shack. Barbossa revealed that she had resurrected them, and he offered to become their captain. Barbossa lead the voyage to return Jack Sparrow and the Black Pearl from Davy Jones' Locker. He constantly bargained with Jack and Sao Feng in order to get the Brethren Court to convene, so that he could fulfill his vow of freeing the goddess Calypso from her human form, Tia Dalma. After the pirates were victorious against the East India Trading Company, he stole the Black Pearl from Jack again. Barbossa and his crew were viciously attacked by Blackbeard and his ship, causing Barbossa to lose his right leg. He became a peg-legged privateer and was sent by King George II to lead an expedition to the Fountain of Youth in order to beat the Spanish. It was later revealed that Barbossa only became a privateer so he could go after Blackbeard and have his revenge. At the Fountain, Barbossa fought Blackbeard and stabbed him with his poisonous sword. Claiming Blackbeard's magic sword, he then became a pirate again and became captain of the Queen Anne's Revenge, sailing full speed to Tortuga.

Later, he is captain of a fleet of ten ships, the main ship being the Queen Anne's Revenge. However, Murtogg and Mullroy informed him that the fleet was slowly being destroyed by Salazar, a cursed spaniard killed by Jack Sparrow. Barbossa made a deal with Salazar, and agreed to find Sparrow for him. He found Sparrow near Hangman's bay, and when Salazar couldn't go onto land due to his curse, Barbossa, Murtogg, Mullroy and the crew went to land instead, but double-crossed Salazar, saved Jack from Pig Kelly, freed the Black Pearl and set off to find the Trident of Poseidon, which would regain him his rule of the sea. He imprisoned Jack, but the Royal Navy soon intervened, though Salazar arrived and killed all of the Navy soldiers, before attacking the ship. Barbossa then realised that Carina, an asscociate of Jack Sparrow and an astronomer searching for the trident, was his own daughter. Before he could talk to her, Salazar attacked, but they managed to escape when they reached the trident's island. Barbossa didn't tell Carina she was his daughter, instead he accompanied his companions to the trident. But, Salazar attacked. Carina broke the trident, lifting all curses, including Salazar's, and the tunnel they were in started to flood with seawater. As they climbed out of the tunnel, Barbossa told Carina his secret and sacrificed himself to kill Salazar and save his daughter. He drowned with Salazar and his cursed crew. 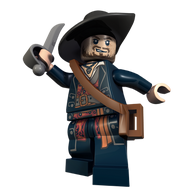 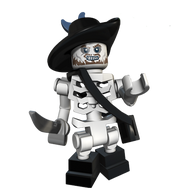 CGI rendering of his skeleton variant 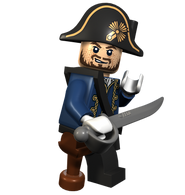 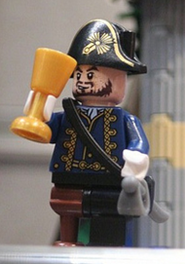 Barbossa with a chalice 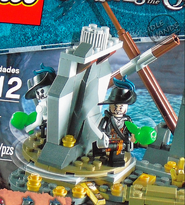 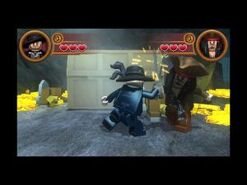 Jack and Barbossa duelling in LEGO Pirates of the Carribean: The Video Game for the Nintendo 3DS 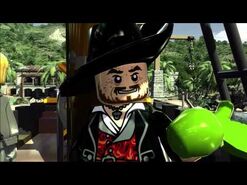 Barbossa in LEGO Pirates of the Caribbean: The Video Game 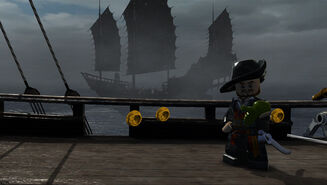 Barbossa aboard the Black Pearl 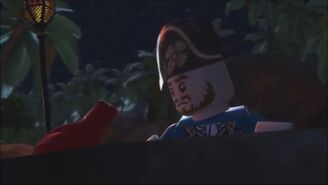 Privateer Barbossa and one of his poison frogs.

Barbossa's privateer game token
Add a photo to this gallery