Hedwig is an owl who appeared in many of the Harry Potter (Theme) sets and LEGO Harry Potter: Years 1-4.

Hedwig is Harry Potter's pet Snowy Owl that was given to him by Hagrid on his birthday. Harry found her name in one of his school textbooks. She would carry mail for Harry, as was ordinary for owls in the Wizarding World. While she was not delivering mail, she would roost in the Owlery with the other owls at Hogwarts.

During Harry's first year, Hedwig was used by Professor McGonagall to gift Harry with a Nimbus 2000, the fastest broom at the time, so he could play on the Gryffindor Quidditch Team. Over the Summer Holidays, Hedwig was kept locked up in her cage because the Dursleys did not want Harry to have any contact with his friends in the Wizarding World.

Hedwig was known to be an unusually smart owl, as she seemed to know where to find Harry at any time, as demonstrated in Harry Potter and the Prisoner of Azkaban when (after Harry left the Dursley's abruptly while she was out flying) she was ready at the Leaky Cauldron awaiting his arrival.

Hedwig was killed in the beginning of Harry Potter and the Deathly Hallows when her cage fell out of Hagrid's flying motorbike and was hit by a stray Killing Curse from one of the pursuing Death Eaters. 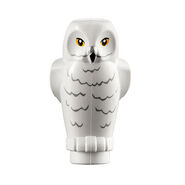 Hedwig in the video game