Helena has unprinted black legs, and wears a white shirt with a slim necklace with a round green gem attached to it, tied with a brown belt. She has yellow hands and orange hair. Her face is double sided, and depicts her both smiling and worried.

Helena initially met Jake Raines when they were both searching for a lost artifact. After barely escaping a deathtrap, Helena and Jake have worked together on many adventures. 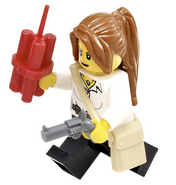 Retrieved from "https://brickipedia.fandom.com/wiki/Helena_Skvalling?oldid=1988326"
Community content is available under CC-BY-SA unless otherwise noted.
... more about "Helena Skvalling"
RDF feed
Accessories
Pistol
Handbag
Dynamite +
Appearances
7325 Cursed Cobra Statue +
ArticleRating
2 +
Image
HelenaSk.png +
InfoboxTemplate
Minifigure +
ShopDescription
When Helena and Jake first met, they were … When Helena and Jake first met, they were rivals for the same lost artifact…but when they got caught together in a dangerous trap, they realized they’d have to help each other to escape. Ever since then, they’ve teamed up whenever their solo missions have been too tough for just one adventurer to handle. Helena speaks seven languages, reads five more, is an expert at deciphering maps and finding hidden traps, and was personally responsible for recovering the Jeweled Zephyr of Zanzibar, the Golden Mask of Montezuma, and the Diamond Scepter of King Scipio. She’s also a crack shot with a pistol. Even though Jake and Helena don’t always agree on the best way to solve a problem, even he has to admit that she’s the best one around at hunting down missing treasures! around at hunting down missing treasures! +
Theme
Pharaoh's Quest +
Title
Helena Skvalling +
Years
2011 +