Helga Hufflepuff is a character in the Nintendo DS versions of LEGO Harry Potter: Years 5-7. She also appeared on consoles with downloadable content.

Helga Hufflepuff was a witch from Medieval times and was one of the four founders of Hogwarts School of Witchcraft and Wizardry. While the other founders chose to have special students, Hufflepuff accepted them all, but the students of her house are described as loyal and hard-working. It is unknown when she died. Helga's portrait remains at Hogwarts. 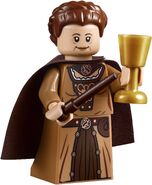