Hermione Granger is a Harry Potter minifigure who was first released in 2001, and made her last appearance in 2011. She is a Gryffindor, and is one of Harry Potter's best friends, and is in the same year as him at Hogwarts.

Hermione Jean Granger was one of the best friends of Harry Potter, Ron Weasley, Ginny Weasley, Luna Lovegood and Neville Longbottom. She was in the Gryffindor House, being a student at Hogwarts School of Witchcraft and Wizardry. The headmaster while she was there was Professor Dumbledore. She was the most intelligent in her year, being at the top of her classes, her favourites being Charms and Transfiguration. Hermione became Harry and Ron's friends after they saved her from a Troll in a girl's bathroom in their first year at Hogwarts.

During her second year, Hermione was one of the petrification victims of the basilisk from the Chamber of Secrets, along with Mrs. Norris, Colin Creevey, Justin Finch-Fletchley, Nearly Headless Nick and Penelope Clearwater. Thanks to Hermione's research, Harry and Ron were able to enter the Chamber and stop the attacks.

In her third year, Hermione received a Time-turner from Professor McGonagall, to enable her to cope with her many new classes. She also bought a cat, Crookshanks from Diagon Alley. Harry and Hermione were able to use her Time-turner to go back in time and rescue the Hippogriff Buckbeak, and Sirius Black, from the Dementors.

In Hermione's fourth year, she attended the Quidditch World Cup with Harry and the Weasley's, and was also at Hogwarts for the newly reinstated Triwizard Tournament, a competition between the three largest Wiazrding Schools in Europe, Hogwarts, Durmstrang, and Beaubatons. Hermione developed a romantic relationship with the Durmstrang competitor, Viktor Krum. She also established the Society for the Protection of Elfish Welfare (S.P.E.W.).

In her fifth year, Hermione, Ron and Harry started up Dumbledore's Army, in response to the new Defence Against the Dark Arts teacher, Professor Umbridge's new, anti-Dumbledore ruling. After Harry suffered a vision of his godfather Sirius being tortured at the Ministry of Magic by Lord Voldemort, the trio contacted Sirius's home, only to be deceived by Kreacher the House-Elf, who told them Sirius was not home. Umbridge catches them, but Hermione leads her and Harry into the Forbidden Forest, where, after a confrontation with Rubeus Hagrid's giant brother Grawp, and the centaur herd, Umbridge was carried away by the centaurs whom she had insulted. The trio, along with Neville, Luna and Ginny, fly to the Ministry on Thestrals. Upon arrival, they learn that Harry's vision was created by Voldemort to fool him into arriving at the Department of Mysteries, so as to remove an important Prophecy from the shelves. The six students battle the Death Eaters, led by Lucius Malfoy and Bellatrix Lestrange. Hermione is knocked unconscious by a dangerous curse. The Order of the Phoenix arrives, stopping the Death Eaters. Hermione is healed in the Hospital Wing later with Ron, Neville and Ginny.

During her sixth year, Hermione continues her studies with Harry and Ron. She dismisses Harry's suspicions about Severus Snape and Draco Malfoy, but is later proven wrong when Harry witnesses Snape kill Dumbledore on top of the Astronomy Tower at then end of the year. She battled Death Eaters with the rest of Dumbledore's Army and the Hogwarts Staff during their infiltration of the school thanks to Draco. Hermione agrees to accompany Harry on his endeavors to destroy Voldemort's Horcruxes.

In Harry Potter and the Deathly Hallows, Hermione is one of the thirteen Order of the Phoenix members who venture to retrieve Harry from his home at Number Four Privet Drive. She then joined Harry and Ron as they searched for Horcruxes. The year culminated in the Battle of Hogwarts, where she destroyed Voldemort's fourth Horcrux, Helga Hufflepuff's Cup, with a basilisk fang in the Chamber of Secrets.

In Years 5-7,Hermione appears in her 2010 redesign, with longer, less bushy hair and her 2010 face. Her spells and abilities include: Wingardium Leviosa, Crookshanks, her bag with an Undetectable Extension Charm placed on it, Diffindo, Lumos Solem, Aguamenti, Expecto Patronum, and Reducto. Her known variations are: Snow Outfit for Godric's Hollow, her Hogwarts Uniform, her striped sweater (Order of the Phoenix) her casual outfit (Deathly Hallows Part 1) and her red jacket seen also in years 1-4. She has a book like in Years 1-4.

Hermione with Crookshanks in the video game 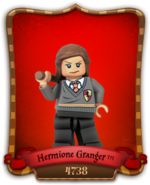 Hermione in her CG photo 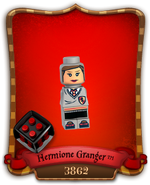 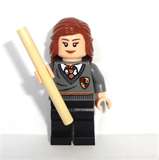 Hermione with a tan wand from the magnet set 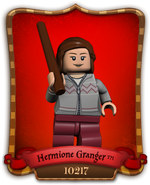 Time Turner Hermione
Add a photo to this gallery