Hero Factory was a constraction theme introduced in July 2010 and discontinued in 2015. The theme was centered around a group of robotic heroes who protected the galaxy from various threats. The theme primarily used new TECHNIC elements for each set, much like BIONICLE. Since it was the successor to the original BIONICLE, the first wave of sets had a label that read “From the makers of BIONICLE” printed on the bottom corner of their boxes, just as the first BIONICLE sets had the TECHNIC logo on them.

The storyline was based in Makuhero City.[1] The largest building and trademark of the city was the Assembly Tower, a 589 meters high, 715 meters wide and 924 meters long tower, located in the center of Makuhero City.[1] It is driven by "cold fusion" and it employs a total of 11,127 employees.[1] This tower is the "Hero Factory" that constructs various robot heroes which are sent out when the Call Center receives calls from victims. They can report their emergency and call on a robotic hero. The founder of the Hero Factory is Akiyama Makuhero.[2]

Inside the Assembly Tower, these heroes are built every day. They are the product of work from design experts and robot construction specialists. These robotic heroes are fitted with solid fiber-carbide plating, Quaza cores and equipped with helmets and equipment to fight evil with guts and gadgets. Once constructed, they are placed in special hero pods and beamed across the galaxy to defeat evil and complete their various missions.

The first villain of the theme was Von Nebula. He had a staff with the ability to create black holes. Von Nebula, formerly known as Von Ness, used to be a hero on Stormer's team; however, during a mission, his cowardice nearly caused the destruction of a city. Blaming Stormer for his failure, Von Nebula swore vengeance on Hero Factory. He employed some former jailbird henchman who banded together to help him, but that was unknown to the heroes. William Furno, the newest hero, was eager to defeat Von Nebula but was depressed when his firm-handed team leader Preston Stormer told him he hadn't the experience to take on the most dangerous villain in the galaxy. He was joined by more rookies, Mark Surge and Natalie Breez. He was also joined by heroes Dunkan Bulk and Jimi Stringer. Using Stormer's smarts and Furno’s talent, the heroes defeated Von Nebula.

The first wave of Hero Factory sets in 2011 was called Mission: Ordeal of Fire. In a Hero Factory book given out with a LEGO magazine in December, it gave this description:
Sent out on a dangerous mission to save a refueling station, the heroes are attacked by vicious Fire Villains, who prove too fast and too strong. To defeat these notorious villains, the heroes must be redesigned and re-equipped with special new weapons and gadgets. But will the redesign work? The history of the Hero Factory rests on its success!

The 3.0 Hero Factory series was titled Savage Planet. It was set on a planet called Quatros, which had a core of Quaza. The main villain was named Witch Doctor, who was trying to extract the Quaza. If he succeeded, the planet would die and break apart. The six heroes, Stormer, Furno, Bulk, Nex, Stringer, and the new rookie, Rocka now with animal powers, must travel to Quatros and stop the villain from killing the planet. But there are savage beasts that attack them, Waspix, Fangz, Scorpio, and Raw-Jaw, who are controlled by the Witch Doctor.

Breakout was the second series to include an XL hero (Preston Stormer), as well as the first series to include all of the original nine heroes (not including the Drop Ship pilot). Each set also contains a hero core with a secret code on the back, used for the Breakout online game. Breakout is also the first Hero Factory line scheduled to have two waves of sets, one in December 2011/January 2012 and one in summer 2012.

The December 2011/January 2012 sets had Rocka, Furno, Surge, Evo, and Breez, who didn’t come out until summer 2012 in the US, with Bulk, Stringer, Stormer, and Nex. Bulk, Breez, and Nex didn’t appear in the TV show for unknown reasons.

Despite for Bulk, Breez, and Nex not appearing in the TV show, there’s a second trailer where Bulk is knocked down by Voltix, and Nex being knocked down by Speeda Demon, and Breez didn’t appear in the trailer but in the FOX Sports Cleatus.

As far as the television series is concerned, it was the first part to have recurring villains, one of which has a main role as the ‘mastermind’ of the Breakout. Voltix seems to be the ‘breaker-outer’ of the villains, since he was the one who allowed Von Nebula to break himself out of his own black hole staff, creating a black hole and allowing the villains to escape.

The 2013 storyline was about a mysterious factory that produces brain parasites to turn creatures of the Hero Factory universe evil. The brains go to different areas on the planet, infecting ice beasts, lava critters, desert crawlers, jungle ogres, rock monsters, sea creatures, and one brain infects an electrical dragon. Meanwhile, in Makuhero City, the heroes are going around in the public, signing autographs, giving away robo-balls, and giving interviews. Surge complains to Breez that he wants action and doesn’t want to be a puppet. Suddenly, the code red alarm goes off, and the heroes rush back. Zib explains that the brains are forcing the hosts to destroy Hero Factory, and they need upgrades. After getting their upgrades, Furno sends Evo into the service canals to combat a wave of Aquagon, sets Surge to guard the Factory (much to Surge’s annoyance), and sends everyone else into the streets. After much trial and error, Bulk finds out that the brains can be removed if they are hit on the spikes. After knocking all the brains off, they notice that Surge's signal is inside the Hero Assembly Tower, so they head back. Dragon Bolt rams into Hero Factory, causing a mass evacuation. Rocka is left to the job of fighting the dragon, while the heroes find Surge. Inside, the heroes find that Surge has been taken over by a brain and has made an army of drones to destroy the factory. As the heroes fight them, Rocka equips himself with 44014 Jet Rocka and goes after the dragon. He manages to remove the brain, and Breez removes the brain on Surge's head, and they shut off the drones. As they walk into the street to help out, Breez asks Surge if this experience changed anything about how he feels to help. Surge replies that since he now knows what being a real puppet is, he won’t turn down anything he can voluntarily do. But in the factory, there are more brains lying in wait for innocent minds, and they latch onto a repair crew, giving the heroes a new challenge to deal with.

The Winter releases were 44000 Furno XL, 44004 Bulk, 44002 Rocka, 44006 Breez, 44003 Scarox, 44001 Pyrox, 44005 Bruizer, and 44007 Ogrum, with 44008 Surge, 44010 Stormer, 44012 Evo, and 44014 Jet Rocka, 44009 Dragon Bolt, 44011 Frost Beast, and 44013 Aquagon being released in the summer. The Heroes resemble knights, and their helmets have a transparent covering over their eyes. The villains have special parasite heads, holding parasite brains which have many similarities to the Krana and Kraata from BIONICLE. These brain creatures appeared in various transparent colors as well as black and glow-in-the-dark, with red spikes and eyes. They have six legs and long spiky tails. An online (or offline, if you have the app) game was released, which involves the player as a partially customized hero and an Alpha Team Hero as his or her sidekick.

In the city of Antropolis, a Metro Line drill project revealed strange creatures from within the planet that abduct the crew. Hero Factory sent in Evo to investigate, which led to an attack on the city by giant beasts. Their objective: capture the civilians to give them to their queen. Alpha Team was flown in to stop the monsters by building giant mechs. Breez discovered that the monsters communicate with each other, while Stormer and Furno were kidnapped. The remaining heroes built more mechs to explore the underground tunnel. After much exploration, they arrived at the center and discovered the queen monster, who proceeded to call more monsters to her aid. Surrounded, Breez talked to the queen and convinced her to free the other heroes and let them all leave. However, a Jumper stepped on a gun and shot it. The Queen thought the Heroes shot it, which resulted in Stormer destroying the colony. They escaped to the surface and the tunnel is resealed, keeping the monsters inside. An online game (or offline, for the app) was released, featuring the player as an Alpha Team hero fighting different beasts and earning power-ups. In the main menu, the player can strengthen the heroes with certain types of powerups or select beasts to fight (some being premium).

Rise of the Rookies

On training missions, the rookies go into environments that are produced by the Hero Factory

A Hero Factory helmet being pulled out of a data-pad

A hero being assembled by machine. 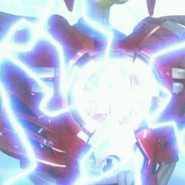 The inside of Hero Factory, specifically, mission control (from the online games)

Two sets and one combo model of the Hero Factory 3.0 line of late 2011

The fire villains taking on the heroes. 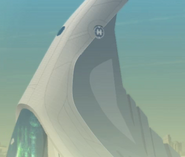 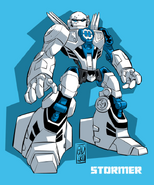 An ad from the LEGO magazine. 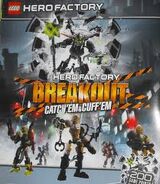 An advertisement for Breakout.

The Heroes from the "Breakout" wave.