Brickipedia
Register
Don't have an account?
Sign In
Advertisement
in: Class 4 articles, Articles in need of expansion, Themes,
and 5 more

Hero Recon Team was a program by Design byME that allowed you to customize and build your own heroes. As a downside, Hero Recon Team had fewer pieces than the LDD application and only allowed you to purchase a limited amount of pieces. In the LDD Hero Factory download, there are over 90 pieces, that could be customized into nearly anything, unlike Recon Team, which allowed only a standard Hero. 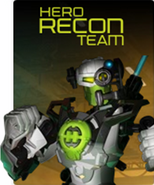 Community content is available under CC-BY-SA unless otherwise noted.
... more about "Hero Recon Team"
RDF feed
ArticleRating
4 +
InfoboxTemplate
Theme +
ShopDescription
What is Hero Recon Team? Shortly after the … What is Hero Recon Team?</br>Shortly after the creation of Hero Factory Mr. Makuro realized that the organization needed to understand the evils that exist in the galaxy, so he formed the secret Hero Recon Team. </br></br>Merrick Fortis was handpicked by Mr. Makuro to help form and lead this new intelligence division. Fortis set up headquarters in a secret location in Makuhero City, and set about recruiting the best and brightest heroes. recruiting the best and brightest heroes. +
Title
Hero Recon Team +