Hippolyta is a DC Comics minifigure who appears in the DC Super Hero Girls animated features.

Hippolyta is the reincarnation of the first murdered woman, a pregnant cavewoman. She and other unjustly murdered women were reincarnated by the Greek goddesses as the Amazons, with Hippolyta as their queen. The only one to not be reincarnated was Hippolyta's unborn child, until she made a clay statue and the godesses (and male god Hermes) gave it the child's soul, turning it into Hippolyta's daughter Diana, best known as Wonder Woman.

Hippolyta herself has taken the Wonder Woman mantle at times, once even becoming a member of the Justice Society. 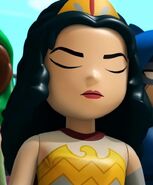