Hobgoblin is a Marvel Super Heroes minifigure to released in 2016.

Hobgoblin has a double expression on his beige colored head piece: a smiling expression and a serious expression. He has an orange hood and an orange cape with torn fabric. His torso has front and back printing and is mainly orange and blue in color. Although his leg piece has no printing it has multiple colors with the lower half being orange and the upper blue. He has a pumpkin bomb as an accessory.

The first Hobgoblin was Roderick Kingsley, a fashion designer who located an old stash of Green Goblin's Paraphernalia. He modified the arsenal (including removing the insanity-inducing effects of the Goblin Formula) and took to the streets as Hobgoblin. Early on in his career, he had at least four people brainwashed and disguised as Hobgoblins to take the fall for him. 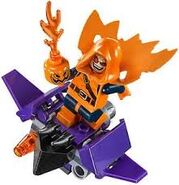 Hobgoblin with his glider. 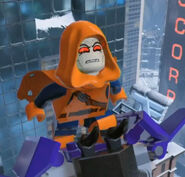