Brickipedia
Register
Don't have an account?
Sign In
Advertisement
in: Class 4 articles, Minifigures introduced in 2013, Minifigures (theme),
and 2 more
English

Holiday Elf is a Minifigures Series 11 minifigure released on September 1, 2013.

The Holiday Elf has a pointy green hat and yellow ears. He has a face with a smiling expression, with teeth that have a gap in the middle being shown. The Elf's torso, which is entirely green, printed with yellow buttons and a brown belt with a yellow buckle, is, strangely, a different shade of green compared to the hat and legs, which, however, are the same. The Elf's legs are short and entirely green. The Elf carries a dark brown teddy bear with a lighter brown stomach and a small red bow tie, and a 2x2 red brick with a 2x2 printed red tile as a gift, and sits on a small black base plate as all other collectable minifigures.

In American folklore, a Christmas elf is a small creature that lives with Santa Claus in the North Pole and acts as his helper. Christmas elves are often depicted in green or red clothes with pointy ears and pointy hats. Santa's elves are often said to make the toys in Santa's workshop and take care of his reindeer, among other tasks they have to complete. 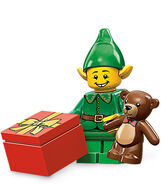 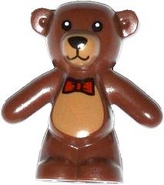 Teddy bear
Deutsch Français
Community content is available under CC-BY-SA unless otherwise noted.
... more about "Holiday Elf"
RDF feed
Accessories
Hat
Teddy bear
Present +
Appearances
71002 Minifigures Series 11 +
ArticleRating
4 +
Image
Col169.png +
InfoboxTemplate
Minifigure +
ShopDescription
“It’s always a holiday somewhere!” … “It’s always a holiday somewhere!”</br></br>Some elves might spend all of their time getting ready for just one or two special days a year, but that isn’t enough for the festive Holiday Elf. He thinks that every day should be a holiday, and it’s his job to work extra hard in order to make sure that everybody has a good one!</br></br>The Holiday Elf knows how to make any kind of toy in the world, whether classic or brand-new. He can wrap a gift so quickly that it seems like magic, and he does it all with a cheerful smile. If you’ve ever gotten a present and you weren’t quite sure why, it was probably this little fellow making sure your every-day holiday was happy and bright!ur every-day holiday was happy and bright! +
Theme
Minifigures
Series 11 +
Title
Holiday Elf +
Years
2013 +
Advertisement