"Thank you so much! I couldn’t have done it without all of you!"
―Hollywood Starlet

Hollywood Starlet is a Minifigures Series 9 minifigure released in January 2013. She also appears in the short-lived LEGO Minifigures Online.

The Hollywood Starlet has a new hairpiece that is short curly hair which is in blonde. She has a smiling face with red lipstick and blue eyeshadow. She has yellow arms and hands and a turquoise torso which is the top of her dress, the torso has a bit of her skin showing at the top and she wears a necklace. The lining of her chest is also seen, as the dress supports it. The rest of the torso is turquoise decorated with sliver spots, and she has a dress which continues her torso markings. She has a golden minifigure-shaped trophy, which is meant to be an oscar. 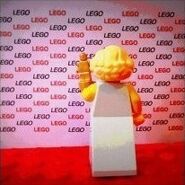 Retrieved from "https://brickipedia.fandom.com/wiki/Hollywood_Starlet?oldid=1998277"
Community content is available under CC-BY-SA unless otherwise noted.