Brickipedia
Register
Don't have an account?
Sign In
Advertisement
in: Class 4 articles, Homemaker, Building Set with People,
and 2 more

Homemaker Figures also known as Maxifigures were the figures used to represent people within various Homemaker sets from 1974 through 1982. They are composed of a head piece and one of several different types of hair pieces, with the rest of the body usually built from basic System bricks.

These figures along with the LEGOLAND Minifigure were first released in 1974 and marked the return of figures to Lego since the HO scale figures released in 1956. After modern Minifigures were introduced in 1978, they would be used together with Homemaker figures to represent a baby or a doll.

These figures would later evolve into a similar Technic figure that made its first appearance in 1986. 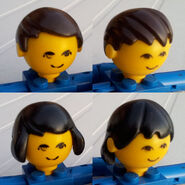