Homer Jay Simpson is a minifigure to be released in Early-Mid 2014 as a part of The Simpsons theme.

Homer and his wife Marge have three children: Bart, Lisa, and Maggie. As the family's provider, he works at the Springfield Nuclear Power Plant. Homer embodies several American working class stereotypes: he is crude, bald, overweight, incompetent, clumsy, lazy, a heavy drinker, and ignorant; however, he is essentially a decent man and fiercely devoted to his family. He dislikes his neighbor Ned Flanders and "Borrows" (take and own for years on end) a great deal of Ned's property. Despite the suburban blue-collar routine of his life, he has had a number of remarkable experiences.

In Brick Like Me, Homer finds himself in the LEGO World as a Minifigure. 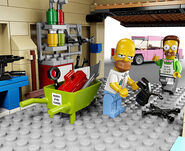 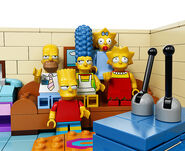 In Brick Like Me
Homer Scared.jpg
Homer finds himself as a Minifigure

In a Business Suit
Add a photo to this gallery