Hondo Ohnaka is a Star Wars Minifigure introduced in 2009. He also appears in LEGO Star Wars III: The Clone Wars as a playable character.

Hondo Ohnaka was the Chief of a band of Weequay pirates headquartered on Florrum. He appears in Pirate Tank as the gunner on the tank. He leads the Weequay pirates on that planet, where he once held Obi-Wan Kenobi, Anakin Skywalker, and Count Dooku captive.

Later, on the planet Felucia, Ohnaka tried to steal a very valuable crop that was being protected by bounty hunters and three Jedi, including Skywalker and Kenobi. Another time, Aurra Sing and Boba Fett came to him looking for help on how to kill Mace Windu, but Ohnaka declined, stating that he would stay neutral.

He was once a friend of the famed bounty hunter Jango Fett.

Ohnaka also appeared in an episode of LEGO Star Wars: The Freemaker Adventures, in which he attempted to force the Freemakers to retrieve rare eggs for him in payment for damaging his ship, only to incur the wrath of Maz Kanata. 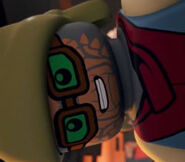 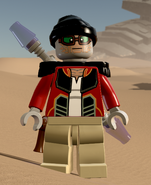