The Horse is a horse animal released in early 2012. This mold is used in Friends and LEGO Disney themes, as mini-dolls require special steed' and saddle' designs to fit their rounded feet during horse riding. The Friends horse has similar proportions to standard LEGO System variations (both old and new) but it has a more subtle curvy shape - especially with their rounded back line - while a standard horse figure's back is flat. It also has very detailed printing but its legs and neck are non-posable. So far nine variants have been produced.

This figure represents an adult horse. In 2013 a foal (baby/child horse) figure was introduced in 41003 Olivia's Newborn Foal. It now has four variants.

The horse is in marching position with all four legs standing on the ground. A 2x2 plate and 2x2 segment with two studs on rounded top can be removed from its back and replaced by a saddle or hitching. To attach hitching, a 2x2 plate on the horse's back has to be replaced by a 1x2 one.

Its neck is elevated and bent, so is its head with closed mouth, small triangular ears and concave nostrils. The horse has printed eyes which show black brows, lashes and pupils on white background.

The tail is long and wavy, elaborately sculptured as well as the mane, which is short and swept to the right side of the neck apart from a small forelock.

Contrary to LEGO system horses, this figure has no printing resembling the bridle, as Friends horses use special molded ones with reins, which are put on their head. The saddle design also differs from standard mold.
Friends horse can be decorated with a bow or awarded with a prize ribbon, thanks to the three little holes: on a creature's forehead, on the right side of its neck and on the base of a tail.

This mold comes in nine variations.

The first variation is all white. It has pale blue eyes. This variant appears in five sets.

The second variation is dark orange with an oblong, white spot on its nose. It has blue eyes. This variant appears in four sets.

The third variation is reddish brown with a black mane and tail, and an oblong off-white spot on its nose. It has brown eyes. This variant appears in three sets.

The fourth variation is dark nougat with a dark brown mane and tail. It has brown eyes. This variant appears in two sets.

The fifth variation is all black with a grey patch around each eye. It has grey eyes. This variant appears in two sets.

The sixth variation grey with several off-white patches scattered around its body. It has grey eyes. This variant appears in two sets.

The seventh variation is white with a dark nougat muzzle and several dark nougat patches scattered around its body. It has a reddish brown mane and tail, and light brown eyes. This variant has appeared in one set.

The eighth variation is all dark nougat. It has dark nougat eyes. This variant has appeared in one set.

The ninth variation is white with a brick yellow mane and tail, and dark stone grey muzzle. It has rounder eyes, which are dark orange. This variant has appeared in two sets.

All the horses live in Heartlake City.

The white horse has been used to create three horse characters; Blaize, Robin and Sunshine.
Blaize is male and lives on the Sunshine Ranch, owned by Mia's family. He is father to Mocca's foal Fame.
Robin is Emma's horse.
Sunshine also lives on Sunshine Ranch and is mother to a white foal named Snow.

The dark orange horse has been used to create three horse characters; Bella, Foxie, and Ruby.
Bella is female and Mia's horse. She is featured prominently in the TV series, making her debut in Welcome to Heartlake City.
Foxie is male and lives at the Summer Riding Camp with his sister Champion. He is 15 years old and loves apples.
Ruby is female and competes in the Heartlake Horse Show. She is best friends with Champion.

The reddish brown horse has been used to create three horse characters; Champion, Major, and Niki.
Champion is female and lives at the Summer Riding Camp with her brother Foxie. She is 11 years old.
Major is male and competes in the Heartlake Horse Show. He is best friends with Ruby.
Niki is male and belongs to Katharina. He is kept at Heartlake Stables.

The nougat horse has only ever been used for Mocca. Mocca is mother to a tan foal named Fame, who's father is Blaize. She lives at the Sunshine Ranch in her first set, but appears to be owned by Stephanie in 10726 Stephanie's Horse Carriage.

The black horse has been used to create three horse characters; Aria, Ninja and Paddy.
It appears Aria may be owned by either Mia or Stephanie as she accompanies them on a camping trip in 41339 Mia's Camper Van.
Ninja lives at the Heartlake Riding Club.
Paddy may be owned by Stephanie or Zack, as he appears with them in 41367 Stephanie's Horse Jumping.

The grey horse has been used to create two horse characters; Metzie and Star.
Metzie is Mia's horse and lives with Mia and her parents at her house.
Star is helped by Olivia and her aunt, Sophie, in 41125 Horse Vet Trailer.

The white dappled horse has only been used once, to represent Spice. Presumably, Spice is another of Mia's horses as she rides him in the webisodes and is included in the one set Spice appears in. It is likely spice lives at the Heartlake Riding Club though.

The nougat horse has only been used to represent Lucy. Lucy may be owned by Stephanie or Zack, as she appears with them in 41367 Stephanie's Horse Jumping.

The white horse is the result of the good fairy godmother turning a mouse into a beautiful horse to pull Cinderella's pumpkin carriage to the royal ball.

Horses in the stable 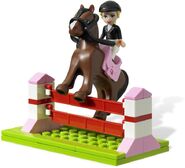 Bella in a TV commercial.

Friends horse compared to City and Lord of The Rings horse figures.