Brickipedia
Register
Don't have an account?
Sign In
Advertisement
in: Class 4 articles, Minifigures (theme), Minifigures introduced in 2015,
and 5 more
English

He has a plain tan torso with yellow hands, plain sky blue legs, and a new smiling face. The hot dog piece is in a 'sandwich board' style, similar to Chewbacca and the Ewoks from Star Wars.

He is included in LEGO Legacy: Heroes Unboxed as an Attacker unit with the abilities Bun Fu, Hot Stuff, All the Fixin's and Relished Opportunity. Before the global launch, he lacked the latter ability. He is notable for being one of two characters to be able to inflict the Time Bomb effect.

In LEGO The Incredibles

Cameo appearance in The LEGO Movie 2: The Second Part 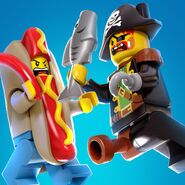