A Hoth Rebel Trooper is an infantry unit equipped with special gear who fought for the rebellion on the ice planet Hoth. These units are not specifically trained to work in snow, being regular Rebel troopers equipped with snow gear. They appear in the LEGO Classic Star Wars line.

Throughout the years, the design of the trooper has been changed dramatically. These include:

Another Minifigure, the named Hoth officer is similar to the "New Goggles" version, but with a new face with a moustache and helmet. 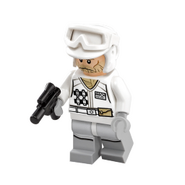