Howard the Duck is a duck-like alien from an alternate universe's Earth known as "Duckworld" where rather than apex species being evolved from apes, it's evolved from water-fowl. On DuckWorld, Howard was brilliant and studied in the martial-art known as "Quak Fu" allowing him to be a formidable combatant.

After a cosmic demon known as Thog the Nether-Spawn attempted to gain in power by shifting the cosmic axis, Howard found himself teleported by chance or fate into the universe of Earth 616 (the mainstream Marvel Universe). On Earth 616, Howard found himself something of a superhero and a P.I. investigator. Howard also became the boyfriend of the human Beverly Switzler.

In the MCU, Howard the Duck was one of the beings captured by the Collector and put on display in his collection. Following the Collector's base's destruction, Howard left and became affiliated with the Ravagers. During the battle between the superheroes and Thanos, Howard was transported to the battlefield where he joined the fight against the Mad Titan.

He invades the Marvel Headquarters with Vulture in order to get more comic coverage, but ends up knocking himself out with his own bazooka.

To get recognition for his superhero work, Howard decides to pitch a multi-platform title starring him. As there are a lot of lines and the Chrono-Con passes are sold out, Howard the Duck is persuaded by Forbush Man to let him help.

Howard in a comic appearance 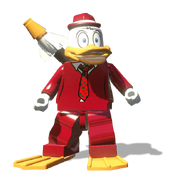