Jim Hammond, AKA the original Human Torch is a Marvel Super Heroes minifigure that appears in LEGO Marvel's Avengers.

Jim Hammond began his life as an android created by Professor Phineas Horton, but a design flaw caused the android to burst in flame in contact with oxygen, without getting damage. After the proccess was stabilized with nitrogen, the android became the first superhero known as the Human Torch during World War II, and took a human alias as police officer Jim Hammond. He teamed up with Captain America and the Invaders during this period.

The Human Torch's legacy lives on two heroes: after the young Johnny Storm got similar powers, he became the second Human Torch, and Ultron used a spare body of the original Human Torch to create Vision. Hammond himself has met both of these heroes, battling Johnny through a misunderstanding and serving alongside Vision in the West Coast Avengers.

Jim Hammond is an android created by Doctor Phineas Horton. 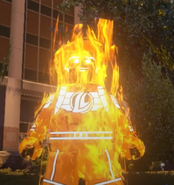