Hunter Orcs are The Hobbit trilogy minifigures released in November 2012.

Hunter Orcs are identical to the Mordor Orcs, except for their identities, allegiances and legs.

The Hunter Orcs were a group of Orcs from Moria, Gundabad and Mount Gram that followed Yazneg and Fimbul, under the command of Azog. They roamed the lands east of the Misty Mountains and were very aggressive. The Hunter Orcs also had a pack of Wargs with them, which were used as steeds. In The Hobbit: An Unexpected Journey the Hunter Orcs' main purpose was to hunt and kill the Company of Thorin Oakenshield. These Orcs' misson was to get Thorin's head for their leader, Azog. In one account, the Hunter Orcs were chasing the Dwarf Company across open land, only to have the latter saved by Elrond and his fellow Elves. In the Attack of the Wargs scene, the orcs trapped the Company in a tree on the edge of a cliff, near the Carrock. As the Orcs were about to decapitate Thorin, Bilbo Baggins heroically saved his leader, saving some time for the Great Eagles that later killed most of the Orcs and saved the Company. 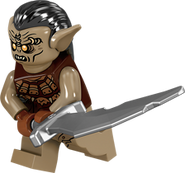 A CGI of a Hunter Orc