Helena Wayne (known as the Huntress), is a DC Comics minifigure released in 2020.

Helena Wayne is the daughter of Bruce Wayne and Selina Kyle. As a child, she looked up to both of her parents, and saw Dick Grayson as an older brother, and Alfred Pennyworth as a second father. However, a criminal by the name of Silky Cernak blackmailed Helena's mother into resuming her identity as Catwoman. Wanting to bring Cernak to justice, Helena made a costume for herself, and designed her own weapons, including a crossbow. Since then, she has fought crime under the alias of Huntress.

Huntress appears in LEGO Batman 2: DC Super Heroes along with fellow Batman-family members Batman, Robin, and Batgirl. Her New 52 outfit contains a purple mask, but also a separate piece from her head, and is taller than her head in which having a print on a minifigure head restricted her older design from doing. The mask also has a strap under her chin like Batman and Hawkman's cowl/helmets. Her hairpiece has been changed from Marion Ravenwood's to Professor Dumbledore's in black, and she has red lipstick. Huntress' torso is black with a white cross design which takes up the entire torso. Her legs, arms, and cape are also black and her boots and gloves are purple. She carries a brown crossbow which shoots silver arrows. 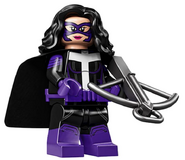 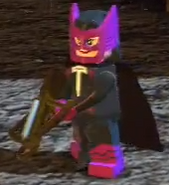