"Yeah... But it's not all bad. Look at this logo, that's pretty cool."
―One of Hydra goons in LEGO Marvel Super Heroes 2

Hydra Henchman is a Marvel Super Heroes minifigure introduced in 2014.

The henchman is a soldier in HYRDA under Red Skull's command. In Marvel HYDRA is formed from the Nazis. 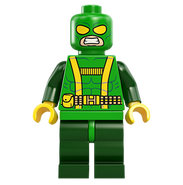 Back printing of the minifigure