Being an Assassin Droid, IG-11 is very similar to IG-88, using exactly the same parts: regular droid body in Dark Stone Grey, and the head divided in three parts, the upper one being printed. The only difference is that IG-11 has slightly different prints compared to IG-88, most notably being tiny red "eye" sensors while IG-88 has bigger orange sensors. 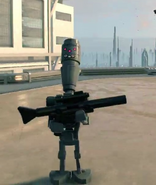