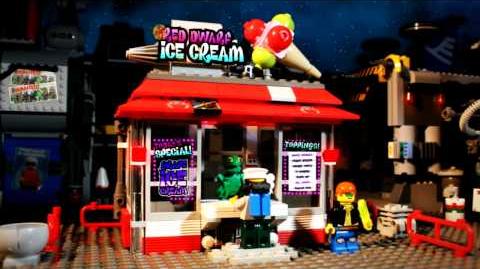 Ice Cream Stand is the fifth video in a series of stop-motion LEGO videos on LEGO.com promoting the Space Police III line.

Two Space Police Officers on patrol trying to find Frenzy's ice cream stand, and upon seeing that he is trying to start over again with a new life, try to prove that he is still a criminal. While one officer talks to Frenzy, the other goes around the back and finds some stolen gold. When she shows it to the other officer and Frenzy, the four-armed alien flies off in his Hyper Hopper into the sky. He hits his head on a waiting Space Police XL Freighter and falls back to the surface where he is arrested. The ice cream stand is shot with a laser and destroyed.