Ice King is an Adventure Time minifigure introduced in LEGO Dimensions in 2016.

Ice King, formerly known as Simon Petrikov, used to be an archaeologist, who worked in the Land of Ooo. One day he bought a strange crown with magical powers from an old dock worker in Scandinavia. Eventually he decided to wear it, in an attempt to make his girlfriend, Betty, laugh. However he found the crown's power to be too much and blacked out after putting on, as well as having strange visions. When he awoke from his collapse, he couldn't remember a thing and found that his love, Betty had left him, scared away by what happened.

After this he never got to see or hear Betty again, and began to record VHS tapes of himself, to allow people to know of the story that's being laid out for him. Over long periods of time Simon's body temperature lowers to 30 degrees, with his skin turning an icy blue, his nose growing long and pointy and growing a large white, snowy beard. Simon was able to survive, despite his current condition, but felt that his psyche was too far gone and twisted, to escape from his crown's influence. The crown ultimately twisted his body too. In essence, he was no longer a human being.

Ice King was also Marceline's "beloved friend" and guardian before eventually abandoning her. Around the time of the Mushroom War and before losing his sanity, Simon found a young Marceline crying in the wreckage. He gave her a stuffed doll from a toy shop destroyed in the conflict to comfort her. This toy would eventually become Marceline's most precious possession, Hambo, which she would keep and cherish until it was sold to Maja the Sky Witch by her ex-boyfriend, Ash. Marceline described Hambo to Ash as her "favorite thing in the world." She was seen alone with a worn-out version of the stuffed toy when Finn and Jake visited her memories in "Memory of a Memory," possibly several years after Simon gave it to her. In "Sky Witch," Marceline is reunited with Hambo after Princess Bubblegum managed to swap it with Maja in exchange for the shirt Marceline gave her. Simon ultimately abandoned Marceline at the same time as the filming of his final video diary, fearing for her safety at what he was becoming. 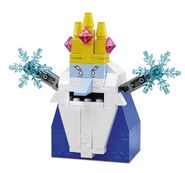 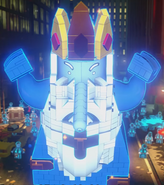 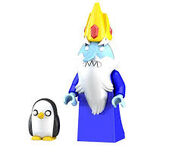 Retrieved from "https://brickipedia.fandom.com/wiki/Ice_King?oldid=1932045"
Community content is available under CC-BY-SA unless otherwise noted.