Imperial Death Trooper is a minifigure released in 2016.

Imperial Death Troopers were an elite variant of the Galactic Empire's stormtroopers that were a part of the Empire's Military Intelligence. They wore black suits of armor and were equipped with specialized weaponry. During the battle of Atollon, 4 death troopers escorted Grand Admiral Thrawn on the planet and defended him against the Spectres, a band of rebels fighting against the Empire. Later on Lothal, a death trooper titled DT-L21 and a few others chased the Spectres through the capital's sewer network. Years later, another squad of death troopers served under Director Orson Krennic's command, acting as his personal security team and later on as an elite responder to the battle at the imperial complex on Scarif. They were present for the theft of the Death Star plans at the beginning of the Galactic Civil War. Death troopers were known to wield SE-14C blaster pistols, a modified E11 rifle known as the E11D Blaster Carbine, and long-range blaster rifles similar to the DLT-19 heavy blaster rifle. They also had C-25 fragmentation grenades. Those selected to command a squad were called Imperial Death Trooper Squad Leaders and wore a large black pauldron. 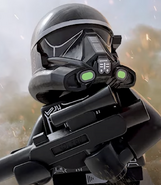 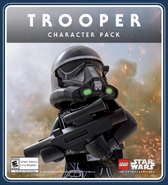