The Imperial Guard soldier or trooper is a minifigure from the Pirates theme, first released in 1992. It was re-released in 2008 with a fresh new version of the uniform and with different faces.

These serve aboard ships and forts of the Imperial Guards. They are based off the British colonial soldiers and Royal Marines (collectively known as "redcoats") during the Napoleonic era (early 1800s). However under Admiral Horatio Nelson around the Battle of Trafalgar (1805), Royal Marines had a distinctive round hat made of lacquered felt, instead of the shako hat worn by the rank and file of the British Army, although during the peacetime after those wars the Marines did re-adopt the shako hat for their dress uniform.

The original version used to have brown backpacks, however in 2008, the new version had a back-printing on torso which resembled a small backpack. The new version also allowed to have bearded faces. 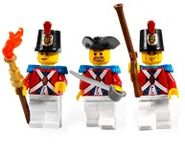 The new versions of Imperial Guards

Unlike the original version, the new version also allowed minifigures to have bearded heads

The back printing resembeling a small backpack 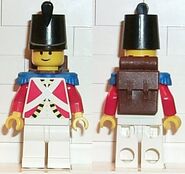